The different types of ear wax

Earwax lubricates and cleans the outer ear canal, kills bacteria and traps foreign objects such as dust and fungal spores. So it isn’t actually a bad thing. Unfortunately, sometimes it builds up to the point that it blocks the ear canal, that’s when you have a problem. The thing is, not all ear wax is the same,  earwax comes in two varieties: wet and dry. The type you have is determined by your genes.

The best ear wax removal process for you is based on the type of ear wax you have and the consistency at the time of removal. Let’s take a look at the types and the ear wax removal methods we use in Worcester.

Orange-brown, sticky and smelly. Made up of the waxy secretions of the ceruminous glands – specialized sweat glands, which are found in the outer ear canal – plus dead skin and an oily substance called sebum.

The best ear wax removal methods for wet ear wax is irrigation, instrumentation or microsuction. In some cases, it may well be a combination of two or all three processes.

White-beige, flaky and odourless. It is dry because it contains less of the waxy secretion and so is largely composed of dead skin. Dry earwax is caused by a mutation in a gene called ABCC11. There do not appear to be any ill effects.

The best ear wax removal method for dry ear wax depends on the consistency. For instance, if it is flaky, well then microsuction will often take it out quickly. However, if it has compacted and it is solid, well then a course of olive oil, followed by microsuction and instrumentation is best.

A Case in Point 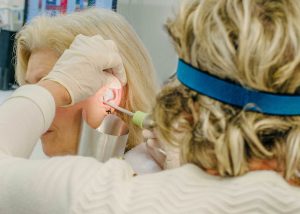 Anthea has been a Worcester Hearing Centre patient for a few years now and during this time; she has had a few earwax removal appointments. Anthea’s earwax type is wet, so she needs a combination of micro-suction and irrigation, depending on her wax build-up.

Microsuction is a safe and comfortable method of earwax removal, no liquids are introduced during the procedure which is undertaken with a microscope and a finely balanced medical suction device. The fact that we can clearly see the ear canal and what we are doing makes it exceptionally safe. With no liquids involved, it is especially comfortable for a Patient and it is usually undertaken in a few minutes.

Ear irrigation consists of pumping water into the ear canal at a controlled and steady rate, to dislodge and flush out ear wax. As the water runs out, a metal basin is placed beneath the ear to collect it and any ear wax it has flushed out.

Earwax removal has become increasingly difficult over the years to access.  Some surgeries provide this service and some don’t and there doesn’t appear to be any reason why it is different from one surgery to another. Upon attending our centre, our Team of Experts will show you your ear using the latest techniques, video otoscopy, where you will see for yourself the condition of your ear canal.  We will then determine the best method for removal of your wax, and show you again the result at the end of the consultation

To book your earwax removal appointment today, please call Worcester Hearing Centre at 01905 617803 or e-mail us at worcester@wshearing.co.uk
Contact Us

Oticon is one of the leading hearing aid brands we offer in Worcester and we have had a lot of success with them. Before the launch of the Opn, we didn't actually think that much of Oticon hearing aids. However, the original Opn was a real game-changer in the hearing aid world. It launched a whole new strategy for dealing with sound inputs in noisy situations. A strategy that has been described as almost natural. The Opn was hugely successful for them and we were pleased with the devices.

The one thing that was missing from the original Opn range was a rechargeable lithium-ion device. However, Oticon fixed that with the introduction of the Opn S range. The Opn S range is Oticon's latest range of hearing aids. It is basically an upgrade on the Opn as opposed to something dramatically new. The range offers three Receiver In Canal hearing aid types, one of which is a rechargeable device and a power Behind The Ear hearing aid model.

The Opn S range has been a great success for us in Worcester, but the Opn S miniRITE-R which is the new lithium-ion powered slimline rechargeable hearing aid has really stood out.  The device is pretty discreet, can fit hearing losses down to sever and it has a telecoil. Like the Opn before it, the Opn S is a Made For iPhone hearing and the battery pack offers 16 hours of use with five hours of audio streaming from Apple devices.

Oticon has been really intelligent with the design of the hearing aid, the lithium-ion battery pack is easily replaceable in the clinic. That is an excellent feature, it means that when the battery is coming to the end of its life, it can be simply replaced in the clinic.

Our Customers Love It

Our customers love the devices, it is a combination of the outstanding hearing ability delivered combined with outstanding convenience. The Opn S really is a very good hearing aid, in particular, in noisy situations. It offers a very natural experience that gives you a good awareness of the voices around you while ensuring that you can hear the voice that is important to you.

Rechargeable hearing aids offer convenience and ease of use combined with modern features to help you hear better. That is why our customers truly love them.